I have just completed my latest painting called "Glimpse of the River" - large. It is a larger version of one i did in June by the same name. This piece is 24" x 36" and is done on gallery canvas. The scene is from upstate New York and was originally photographed a couple of years ago. This painting captures the scene as if one is just catching a glimpse of the river from the bank from a clearing.

The painting is for sale for approximately $580.00 unframed with shipping extra. 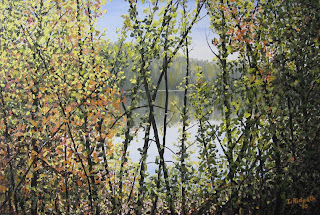 The Milton Canadian Champion newspaper just published a nice article about me and the AM Gallery. Please read it here: http://www.insidehalton.com/community/milton/article/860142

Thanks to Stephanie Hounsell the Champion reporter for the great article.

Promote Your Page Too

J. Ian Ridpath
While a youngster I began charcoal and pen and ink sketching in my school years. I then followed my father's coaching in turning to oils. Because of my love for the Group of Seven I have followed this style of impressionism. I worked in electronics for over forty years specifically in the high-tech semiconductor field. Part of this long career was the authoring of technical documents and designing web pages and web sites.